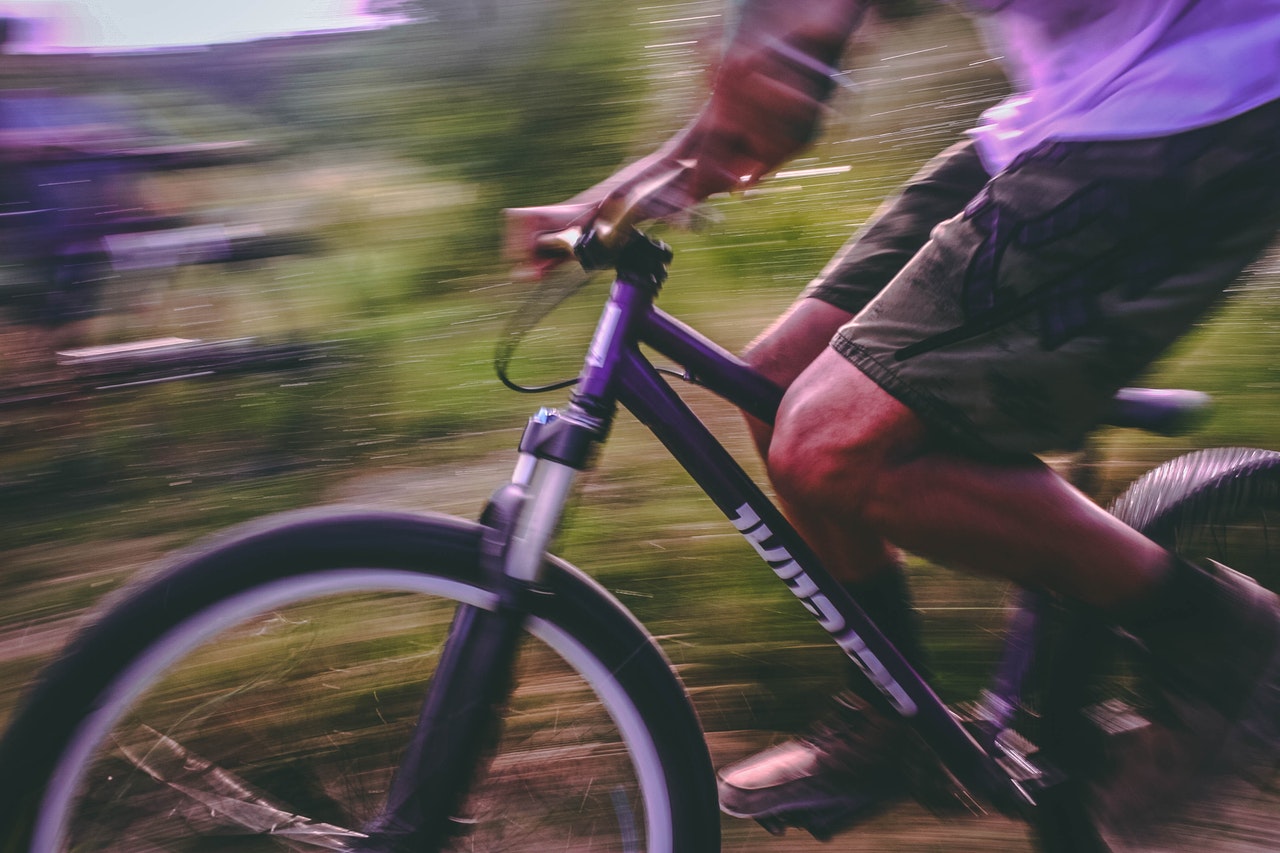 Carbon Air products are typically designed to reduce the stiffness of gasses, generally air, in a number of applications, from acoustics to vehicle dynamics. We have a range of products under development that are designed for mountain bike air suspension systems, to provide an additional avenue for customisation to the end user or a suspension manufacturer. Before describing these products and their effects, an overview of suspension systems is necessary, to place Carbon Air solutions in their context.

Suspension systems have a number of functions. They are primarily used to support the weight of a vehicle, ensure consistent contact with the road, and absorb impacts and attenuate the roughness of a road profile; this leads to increased handling, stability, reduced wear and increased rider comfort. Suspensions have a range of allowable motion: this is the amount of travel or their stroke length. The amount of compression of the suspension when under the operating load, which determines the ride height, is the spring sag.

Bicycle suspension systems are typically found in mountain bikes, as they are needed to handle rough terrain and jumps. Bicycles may have a shock absorber and/or a front fork suspension. Both are comprised of a spring component, that stores energy, and an oil damper, that dissipates the energy by converting it into heat. Oil dampers will not be dealt with in this paper, though their behaviour is important to the overall performance, as the focus is on enhancing spring performance. There are two types of spring commonly used: coils and air springs. Coils are robust and consistent, but heavy, not easily adjustable. Air springs are light and highly customisable, while their potential drawbacks are in their non-linear behaviour and temperature dependence. The choice between the two is quite subjective, and beyond the scope of this paper to examine in detail. The products developed at Carbon Air are designed to modify the behaviour of gasses, and so our focus is on air springs. As far as systems for mountain bikes, our development has been based on dual chamber suspensions, simplified schematics of which are shown in Figure 1. We have applied our products to the pictured RockShox Pike fork and the RockShox Deluxe shock absorber as case studies, and measured results in later sections show these.

The spring force of a dual chamber air suspension depends on the pressure difference between the two air chambers. The air spring has a characteristic stiffness curve: the stiffness is high at the beginning and at the end of travel, while it is lowest in the middle. That is because the stiffness increases as the volume of either chamber gets small. The total stiffness is lowest when both chambers are of similar volume, and ramps up rapidly when one of the two chambers is reduced to a small size. A model of this stiffness curve is shown in Figure 2.

Compared to coil springs that have a more constant stiffness through travel, air springs are naturally progressive, i.e. their stiffness increases with travel. The stiffness is also dependent on the speed of compression/extension, because of the thermodynamics of air: faster compressions are adiabatic (no heat is exchanged between the compressed air and the surroundings), resulting in a higher stiffness. The pressure in a sealed chamber increases and decreases with temperature, and so air springs are temperature sensitive, and that is typically unwanted behaviour.

Air springs may be experienced as lacking in support compared to a coil, because the stiffness has a dip towards the middle of travel.

The stiffness and performance of an air suspension can be modified in a few ways; these are summarised in Table 1. Each modification has its own benefits and drawbacks, which depend on the rider’s requirements and preferences. The effect of Carbon Air products is distinct from all of these and will be shown in Section 3.

Charge pressure
The simplest modification is to adjust the air pressure. Higher pressure causes both higher stiffness and higher ride height, and lower pressure has the opposite effect. Regulating pressure is required to adjust for the weight of the rider, but can also be tweaked, for example, to raise the stiffness to accommodate greater impacts without bottoming out, for a more aggressive style.

Volume spacers
Another modification is the use of solid inserts, inserted into the positive chamber, that reduce the positive air spring volume. These cause the spring curve to become more progressive and stiffer with more tokens, as the size of the chamber decreases. The sag point will also be slightly raised. RockShox Pike spring curves with one and two tokens are shown in Figure 3.

Expanded negative chamber
Finally, more involved changes can be made to the geometry. For instance with the Rockshox DebonAir kit the negative chamber volume of a RockShox Pike fork is increased by changing the piston. Similarly, MegNeg upgrade for the RockShox Deluxe rear shock absorber also expands the negative chamber. This particular modification, for equal charge pressure, somewhat lowers the sag point of the spring, and, by reducing the stiffness of the negative chamber, causes the stiffness to be lower and more linear in the first half of travel. A higher pressure, however, is required to maintain the same ride height, which causes much higher forces at the end of travel as the positive chamber is compressed. The trade-off can be clearly seen in the force and stiffness curves for the RockShox Deluxe shock absorber with the MegNeg modification in Figure 4. Each modification has strengths and drawbacks, and ultimately it is up to the individual rider to determine for themselves which configuration is most appropriate for their style.

The properties of gas in a cavity are considered unchangeable, so modifying the stiffness of an air spring is usually done by altering the chamber inner geometry as described. But what if you could change the behaviour of air? This is where sorption comes into play, the key ingredient to Carbon Air suspension products.

Activated carbon, like other sorptive materials, has the property of trapping (adsorbing) molecules to its surface, through the action of van der Waals forces. Thanks to its high surface area (over a thousand square metres per gram) and network of pores, activated carbon can adsorb a large amount of gas, which forms a film on the solid surface, removing it from the gas phase. The amount adsorbed increases or decreases based on the gas pressure. An isotherm of one of our activated carbons is shown in Figure 6, where the amount of gas (nitrogen) adsorbed per gram of carbon is plotted against pressure.

In an air suspension with such material, the pressure curve of the chamber is dramatically altered. An increase in pressure during compression causes additional gas to be adsorbed by the material, while a drop in pressure from extension causes some of the trapped gas to be released from the surface (desorbed). What this means is that the changes in pressure with compression and extension are counteracted by adsorption/desorption, and so are less dramatic than what they would otherwise be. As a result, the air suspension behaves as if it had a larger volume, and hence has a lower stiffness! Each unit of volume occupied by our activated carbon is roughly doubled, though the effect varies based on the variety chosen and the operating pressure, with the strongest effect found at lower pressures. For example, a 200 mm long chamber with a 50 mm insert can be made to behave as a 250 mm long chamber. This may be counter to intuition, but results in the next sections show the effect is real, and can be put to good use.

Carbon Air products decrease the stiffness of an air suspension, and linearise the stiffness curve through its travel, reducing progressivity. This is beneficial in a few ways.

Grip
A lower stiffness helps the wheels maintain contact with the terrain, as the spring compresses more in response to impacts, avoiding changes in attitude of the vehicle.

Impact absorption
The presence of activated carbon helps to maintain the compliance high at the end of travel, which is beneficial for absorbing larger impacts.

Vibration reduction
As the suspension and car is a mass-spring-damper system, a lower stiffness will reduce the resonant frequency of the system, causing less high frequency vibrations to be transmitted to the handlebars. The stiffness of an air spring can be reduced by lowering the charge pressure, however, this cannot be done in most mountain bikes without also dropping the ride height as the suspension is compressed by the static load. With activated carbon, the stiffness of the air can be lowered without affecting the charge pressure, resulting in a smaller impact on ride height.

Not all materials in which sorption happens, and not all activated carbons can be applied to suspension systems. Our Carbon Air inserts for bicycle suspensions contain varieties of activated carbon that are selected for their fast response, high stiffness reduction and low temperature sensitivity. We have a number of prototype inserts available for different fork and shock models, as shown in Figure 7.

The spring force curves comparing a RockShox Pike fork with and without a Carbon Air insert are shown in Figure 9. When using a volume reducing token, the pressure – and hence the spring force – increases more steeply and is especially high towards the end of travel. For the same charge pressure, the sag point is going to go up, and both stiffness and progressivity increase. Our inserts do the opposite: the carbon linearises the spring, reducing stiffness and progressivity by alleviating pressure build-up in compression. Our fork inserts can be made modular, to work the same way as most volume spacers on the market, and so the strength of the effect can be tailored to a rider’s preference.

Air shocks are typically charged to higher pressures than front forks and are designed to deal with greater impact forces. The same principles as for fork suspensions apply here. Carbon Air inserts for the RockShox Deluxe are shown in Figure 10, and, due to low dead space in the positive spring, are designed to occupy most of the available volume for maximum effect, reducing stiffness and progressivity. The resulting spring force curves are shown in Figure 11.

An insert can be used simply as a stiffness reducer, or it can also be employed in combination with other modifications. In our case study, a Carbon Air insert has been used to reduce the force at the end of travel of a modified RockShox Deluxe with a MegNeg upgrade. The MegNeg upgrade on its own increases the negative chamber volume, which drops the stiffness at the beginning of travel. However, since the ride height is partly determined by the suspension initial sag, a higher pressure is required to maintain ride height (compensating for a drop in sag) causing much higher pressures near full compression and not allowing absorption of larger impacts. 195 psi are required, compared to 160 psi for the unmodified shock. Using our Carbon Air insert, the high force at the end of travel is reduced, and the stiffness of the Deluxe with MegNeg is reduced from 100 N/mm to 80 N/mm, as can be seen from Figure 12. With a reduced spring force, a similar amount of travel is available as an unmodified Deluxe, but with a much more linear stiffness throughout the range.

Carbon Air products for air springs enhance the compliance of the filling gas, and extend the effective volume as gas is trapped in compression (adsorption), and released in extension (desorption). In an air suspension system, this lowers stiffness and reduces their natural progressivity, effectively increasing the spring volume. The benefit of lower stiffness and more linearity is to allow greater impact absorption, better wheel contact with the ground, and reduced vibrations for rider comfort. A number of prototype inserts have been developed and tested on mountain bike air suspensions and shock absorbers.